A Mexican Wave in an Old People’s Home

I must have done something either really terrible in my last life, or lived a life so full of adventure and adrenalin, someone is trying to recalibrate the cosmic scales: either way, it is class assembly time. Now don’t get me wrong, I love getting involved in my son’s school life. Every day when we arrive home from school pick up, I enjoy nothing more than holding his Hudl to ransom whilst I clinch him in a sturdy headlock in return for a morsel of information about what he did that day. But attending the class assemblies? It’s parental engagement gone mad, I tell you.

You know you’re in trouble when the class troop into the hall holding a variety of small percussion instruments. Ooh good, I think, tambourines. Because there is nothing quite like the smash of a chubby fist against a surface scarred with the fingernails of the previous hundred reluctant musicians to put joy in your heart and a sweet aural caress on your ear drums.

The first child stands up. An expectant hush falls over the audience as the child starts to speak. We all collectively lean forward. His lips are moving, but does he realise there is no sound being emitted? Oh wait, I think there is, but it would take ears better trained than mine to hear what is being said and if I lean forward any further I am in danger of taking out at least three Year 1 pupils sitting on the floor in front of me. I squint a bit in the vain hope that I have learned to lip read since I woke up, but no, it is not to be.

Many, many, many more minutes pass in a similar vein. I watch the children, some mumbling inaudibly, others loud enough but with a lack of intonation that would make Stephen Hawking blush. Faces are partially obscured by pieces of paper on which their line is typed in a large, over-optimistic font, and I wonder why they don’t just hold these up instead. It transpires that they are explaining what they have been working on this term. The narrative is told not-quite chronologically, as due to some administrative queueing fuck up as they left the classroom, it seems that they put on a display of flying machines that they had made, and then they made them.

They show us the masterpieces that they have been working on in the precious minutes squeezed between lunch, discussions of who will play Kilo Ren at play time, nose picking and SATs practice. I believe what is meant to happen is a simultaneous raising of the pieces of work. What actually happens is more like a Mexican wave in an old people’s home. Gradually, each child  slowly raises their poster, eventually prompting the child standing next to them who was up until that point busy staring at her shoes, to raise hers, and so it goes on down the line.  Slowly. Eventually, every child holds up their prized poster, kitchen roll tube aeroplane or a small paper construction that closely resembles the pile of screwed-up recycling on my kitchen surface. Several eyes are poked out with the sharp end of a Spitfire’s cardboard wing, an eardrum is compromised by an oversized lolly stick propeller and several cheeks sustain papercuts. That bit is quite entertaining, to be fair. 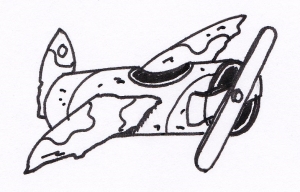 My attention is drawn back to the room after an indeterminate period of time where I may or may not have been staring at the hall clock, just in time to see my son deliver his allotted line, facing strangely sideways for some reason, contorted downwards so he can see his script which he seems to have left on the floor and with both hands wedged firmly in his pockets. It is a distinctly underwhelming moment. Sorry, did I say underwhelming? I meant life-affirming. Yes, that was it.

We then segue neatly (by which I mean 30 children all stare at each other with growing panic as no one is saying anything) into the Maths demonstration. One child plods slowly down the line of class mates, thumps up the stage steps and across the stage to the waiting flip chart. He reads aloud the Maths problem written on the sheet, addressing mainly the flip chart, and with way too much care and attention, underlines the important information. This is a boy who has been drilled in the responsibility bestowed by a Marker Pen. He slowly retraces his steps and finally arrives back at his original place, solemnly handing over the flip chart marker to the girl next to him. She sets off down the line at a similarly regal pace, leisurely walks up the steps and heads to the flip chart. By now, I am inadvertently clenching my fists. She re-reads the problem. Slowly. Eventually, she raises the marker to the page and with much deliberation, writes the sum down that needs to be solved. Please don’t read it out, I silently beg. She reads it out. Finally, she turns and makes the long, slow trek back across the stage and returns to her place. She offers the baton to her neighbour and there is a brief fumble. The audience hold their breath, but after an ungainly recovery, the next boy funeral marches toward the stage.  Three days later when he reaches the flip chart, for reasons known only to him (and that’s being kind) he rewrites the sum below the original sum that has just been written. The same sum. Again. Slowly. At which point half the audience are silently screaming: THE ANSWER IS 42. JUST WRITE THE SODDING ANSWER, WILL YOU?

When he finally hands over the marker to the brightest boy in the class, we know we are reaching the nail-biting finale, as he is the only one who would be entrusted to deliver the denouement without fear of him writing the wrong answer, saying something untoward or suddenly eating the marker pen. He writes the number 42 on the flip. We all clap, out of total and utter relief.

Once they are all back into a semblance of a line, another child mumbles something, which appears to be the cue for them to all pick up their instruments. I brace myself. From the old speakers in the corners of the hall crackles Bob Marley’s Three Little Birds. Thirty kids, twenty-eight of whom look like they’ve just been told they’ll never see their iPads again, less burst, more slide reluctantly into song. At the chorus, (mis)guided by the wild gesticulations from the teacher who is standing at the back, arms flailing as if she is having some kind of seizure, the children start banging, scraping, tinging and rattling their instruments. The noise they produce bears more than a passing resemblance to a 30-piece dinner service, complete with cutlery, glasses and stainless steel tureens, being tipped off a dining table. Every three seconds. Christ, I never realised that that song went on for quite so bloody long. It was alright for Bob Marley, he was off his tits on top-quality weed. I have to endure this stone-cold sober.

Enthusiasm from the performers begins to wane dramatically after the first chorus, but not so much as that of the audience. Lyrics had obviously been forgotten on the long walk from classroom to hall, so along with mis-timed banging we were treated to mis-singing as well, whilst one boy with a drum had decided the best way to play the aforementioned instrument was to hold it stationary in his left hand and move his entire body to meet it at every beat. That boy is going to have a core of steel by the time this song is bloody finished. One girl standing half way down the line is now close to tears, her bottom lip trembling (also not in time with the music). Perhaps the dawning realisation of the utter chasm there exists between the words she is barely singing (don’t worry, be happy) and the current godforsaken predicament she finds herself in, is finally sinking in.

And eventually, when I thought I may have to leave the room for fear of developing a permanent nervous tic, it stops. Well, ‘stops’ may not be the right word, as it makes it sound like there was a definitive, certain cessation of noise which is not wholly accurate. A proportion of the children stop hammering the shit out of their instrument, whilst the remainder carry on for some time, either due to lack of attention or sheer bloody-mindedness, until only one girl remains defiantly tinging her triangle.

And so another class assembly draws to a close. There is a collective sigh of relief from parents, mainly due to the fact that it is finally over, but also in no small part as no one’s child has vomited, shat their pants or shouted something inappropriate. Which on reflection, is a pity, really.

This entry was posted on Thursday, May 26th, 2016 at 1:32 pm and tagged with class assembly, mothering frights, percussion instruments, primary school, school assembly and posted in Uncategorized. You can follow any responses to this entry through the RSS 2.0 feed.
« Are you sure you are not measuring my poo hole?
The Beginner’s Guide to Primary School Part 1 »